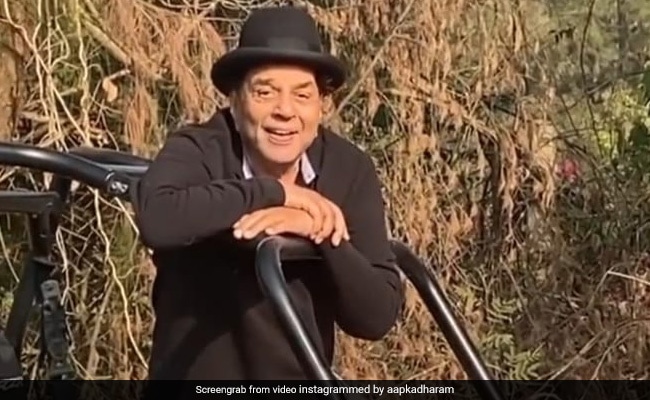 Famous Bollywood actor Dharmendra is loved by all. He has won the hearts of the people with his performance. Dharmendra is also known as Man. Recently, Dharmendra appeared on the stage of dancing with actor Shatrughan Sinha. During this show, Dharmendra came to know that Bollywood’s famous actress Waheeda Rehman has accused him of flirting. To which Dharmendra Farmhouse Video responded to him in a tremendous manner. After this, he has now posted a video, which is going viral on social media. In this video, Dharmendra Video is seen in his farmhouse and is talking about farming.

Dharmendra (Dharmendra) has shared a video on his Instagram account. In the video, it can be seen that they are roaming in their jeep in the mustard field. Through the video, he tells his fans, ‘Hello friends, how are you, see wheat and mustard growing in these stones. How did you feel meeting you after a long time? How are you all right Live a lot of love to all of you.

Even today in the video, his style is the same as before. With this video, he wrote in the caption, ‘Friends, how is hard work, this is mine. Farming on rocky soil. Mustard on palm .. Had arrived in boyhood itself. His fans are commenting a lot on the video shared by Dharmendra (Dharmendra) and are welcoming him. One of his fans has written, ‘Welcome Dharamji, we are all very happy to see you again’. At the same time, others wrote ‘we are fine how are you’.

Let me tell you, before this, Dharmendra (Dharmendra) was seen on the sets of Dance Deewane reality show. Where he also enjoyed a lot. After this, Dharmendra will appear in the film ‘Apne 2’ along with his sons and grandchildren. In the film Apne 2, three generations of the Deol family will be seen together.