Explained: What is the Sister Abhaya case and why it took 28 years for the verdict?

May 27, 2021
On 27 March 1992 in Kottayam, Kerala, the body of a Catholic nun Abhaya (Sister Abhaya Case) was found from the well of St. Pius Convent. After initial investigation, it was termed as suicide and the local police tried to clear the case. But after the post-mortem report confirmed the scars and evidence of the wound on the corpse, the theory of murder came out in the CBI Investigation later with the disclosure of arguments and evidence in the case. The longest running in Kerala The decision came after 28 years in the murder case, then the case is again under discussion.

The Special CBI Court of Kerala awarded life imprisonment to Father Thomas Kottur, a clergyman and a nun, Sister Sefi, convicted for murder in the 28-year-old Sister Abhaya Murder Case. Should it be considered justice to punish the accused after 28 years? This is a separate debate, at the moment we tell you about this case and the decision taken so long.

Who was Abhaya and why was she killed?Abhaya was a 19-year-old girl living in the St. Pius Convent in Kottayam for a pre-degree course. When his body was found in a well in 1992, the local police and the Crime Branch of Kerala closed the case file, calling it a suicide. But many activists and people, including Jomon Puthenpurkkal, descended on the protest demanding justice against Khanapuri in this case. 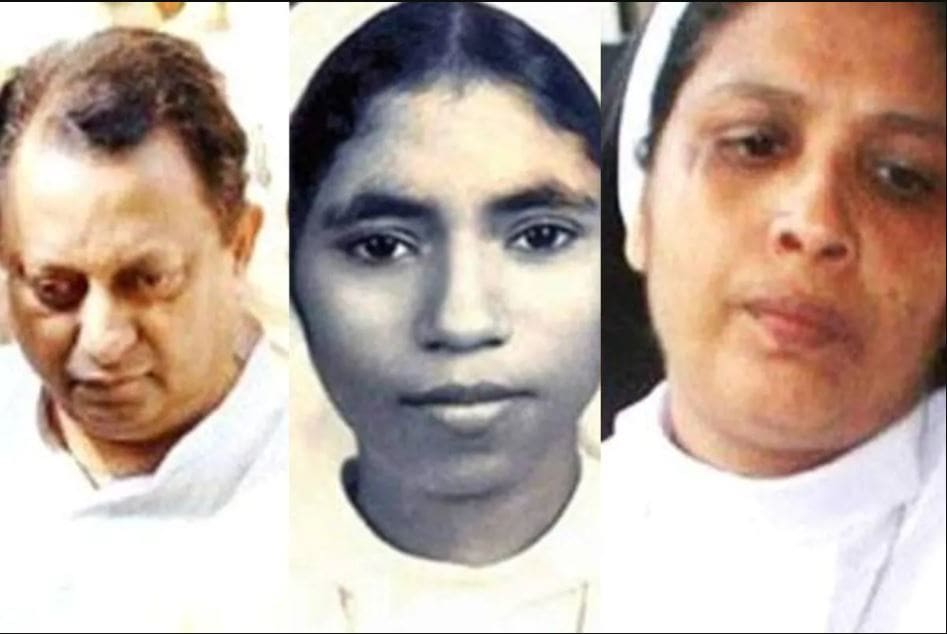 Father Kottur and Sister Sefi accused in the Abhaya case were sentenced by the court.

The CBI investigation began in 1993 and the investigation continued for 15 years. 13 batches of CBI officers investigated the case. Over time, a variety of theories came into this case. But the most popular theory about the cause of Abhaya’s death was that he had seen the pastor and nun in an objectionable condition, due to which he was killed and tried to divert the case by trying to erase the evidence.

read this also :- Do you know how many countries in the world do not celebrate Christmas?

27 years of CBI investigation
The CBI investigation was started in the year 1993. The first 3 reports said that it was not possible to identify the killers because all the evidence was erased. The court rejected these reports and then got the CBI investigated with the Kerala branch. Eventually, the charge sheet came out, in which Father Kottur, Father Jose and Sister Safey were named as accused for murder and erasing evidence. He was also arrested in 2008.

According to the charge sheet, when Abhaya saw the three accused in an objectionable position at 4 am, Kottur strangled Abhaya, Sephi attacked him with an ax and then the three together threw Abhaya into the well. After this, the whole slang to erase the evidence was cooked. Not only this, in order to erase evidence, the name of Crime Branch SP Katie Michael, who was the investigating officer of the case in 1992, also came up.

read this also :- If schools were not dropouts, would the country get a better university?

In 2009, CBI named 177 witnesses, narco tests of the three accused were also done, but at that time the report of narco test could not be presented as evidence in court. From here, questions also arose on the view of the judge of the case and there was a demand for hearing in another court. Time went on in this entire process. These are the reasons behind the decision taking years
Finally in 2018, Michael was also accused in the charge sheet and in the same year, the trial court acquitted Father Jose for lack of evidence. Trial started in CBI court in 2019 and now in 2020 the decision in this case came.

read this also :- How were the elections held in Jammu and Kashmir for the first time, who won and who lost?

During this entire period, many of the 177 CBI witnesses either died or were overturned by the statement. For example, Abhaya’s mother and father died in 2016. The prime witness of the case and the head of the convent, Mother Sister Legeux, were also killed. Similarly, S Das, who was a watchman near the occasion, also died. At the same time, the talk of retracting the statements of about 9 witnesses also came to light.

On the other hand, this case was also engulfed in a mutual confrontation between several CBI teams, police and crime branch. Not only this, there were also reports of church pressure and deadlock kept coming up between the judge and the CBI investigation team. For all these reasons, it took 28 years to come to a decision in the case. A large section follows the doctrine of “Justice Delayed is Justice Denied”, which must be considered.

Sheets of snow lying on the mountains in front of Kangana Ranaut’s balcony, enjoying the sun with tea