How ‘liberal’ is the Centre’s liberal vaccination policy really? See this document

The Center has changed the existing guidelines in its policy announced on 21 April. Till the coming of this policy, only the center could buy the vaccine stock from the manufacturers. Following the change in policy, the Center allowed state governments and private hospitals to directly buy up to 50 percent of the stock of vaccine manufacturers Serum Institute of India and Bharat Biotech.

Despite widespread criticism, the Center defended the new policy, claiming that it was in response to states demanding more freedom to be able to access vaccines. But the documents with NDTV do not match this claim of the Center.

Letters sent by the Union Health Ministry to the Delhi government on May 17 show that the state is closely monitoring the supply of states that can buy vaccines directly from manufacturers. NDTV reviewed two letters sent by Manohar Agnani, Additional Secretary in the Union Ministry of Health, to Vikram Dev Dutt, Principal Secretary, Health and Family Welfare, Government of Delhi for Kovishield and Kovaxin.

In the letter, the Center says that 3 lakh doses of Kovishield and 92,000 doses of Kovaxin are available for direct purchase to the Delhi government for the month of June. The letter also mentions the number of doses to be given to Delhi under the Centre’s free supply scheme for immunization of people above 45.

READ MORE  Covid Vaccination in India: Government told- the eye is being placed on the application of cocaine, fill the form for a week

Uproar over vaccine cocktail in UP: first dose ‘KovidShield’ and second ‘Co-vaccine’, villagers in panic

The letter has only deepened the confusion about liberalized policy, which has further put the vaccine campaign in jeopardy. States have repeatedly complained that efforts to buy vaccines directly have been largely fruitless, with vaccine manufacturers expressing an inability to fulfill their orders. 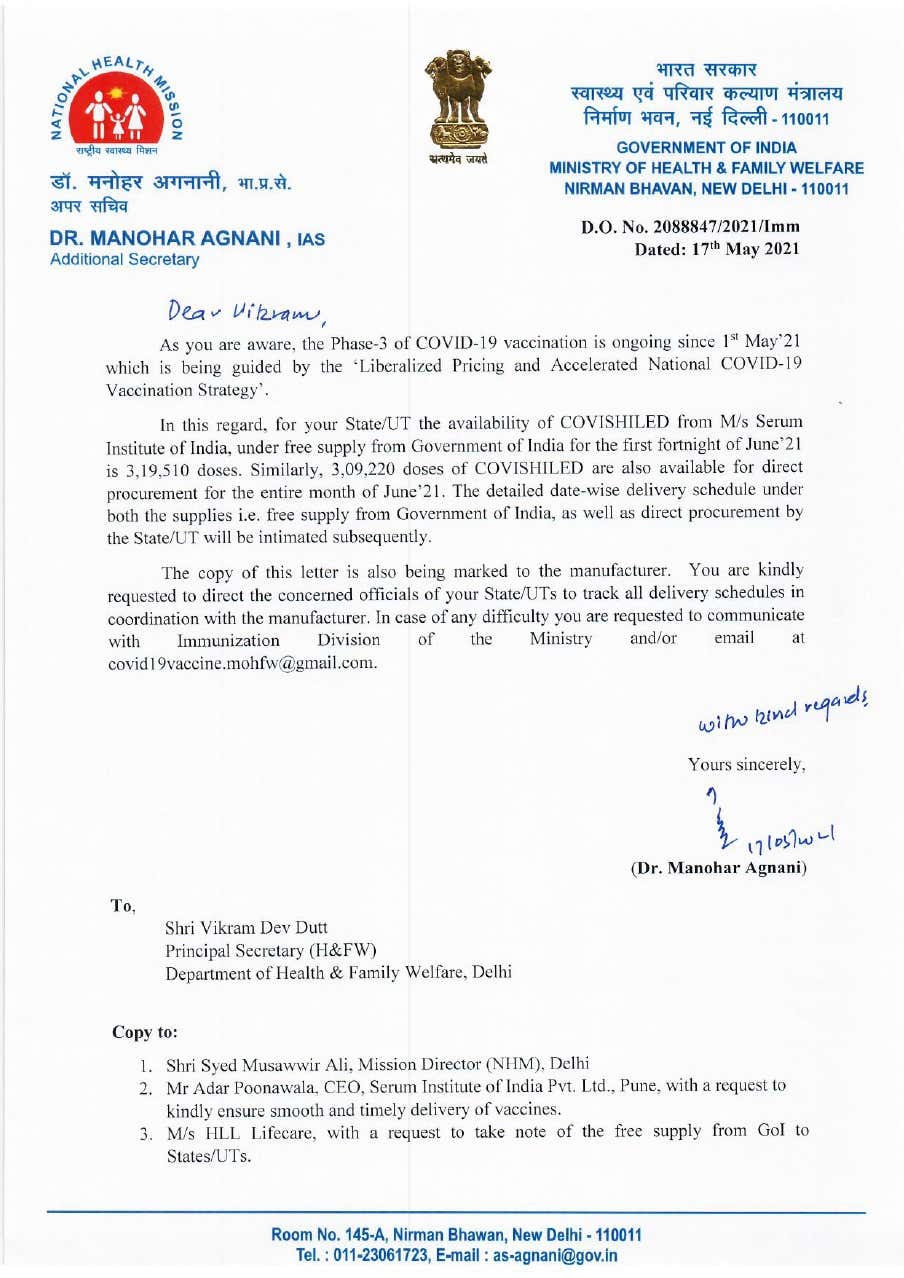 The Delhi government announced on 26 April that orders had been placed for 67 lakh doses of Kovaxin and Kovishield, but since then they have been receiving only small amounts of vaccines, scale-back or even vaccination centers. Being forced to shut down.

In response to a letter from the Delhi government, Bharat Biotech said, “We are delivering the vaccine according to the instructions of the government officials concerned.”

Explain that in an affidavit before the Kerala High Court on Monday, the Center said, “The doses available under direct purchase by the state were prepared on a proportional basis based on the state-wise population of the 18-44 year old population group. “

First drive-through vaccination started in Delhi, get vaccinated in a car