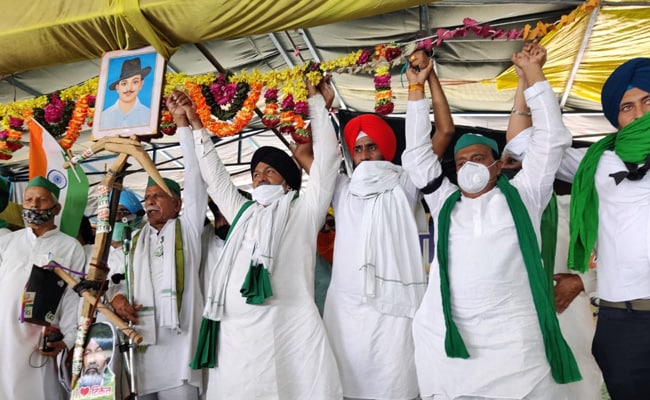 On the Ghazipur border on the occasion of Black Day and Buddha Purnima celebrated by the United Front Peasant movement Rakesh Tikait, the national spokesperson of the Indian Farmers Union (BKU), which is leading the (Farmers Protest), said that what can be worse for us is that we are celebrating Black Day on the occasion of Buddha Purnima, though It is just a coincidence of the date. India is a country of Buddha and we are followers of Buddha. Tikait said that the farmers will run their movement peacefully.

Rakesh Tikait Said that the agitating farmers should always remember this, for this a white flag will be installed at the site of the agitation. Addressing the farmers from the stage, BKU leader Tikait said that the movement will go on for a long time. Laws can be made in the Corona era, so why can’t it be canceled. The government has been trying to crush the movement and will do it further but the farmer is not going to leave the boundaries of Delhi. The farmer can return on the same condition, cancel all three new laws and make laws for MSP.

‘Black Day’ after 6 months of agitation, farmer said – Government wants to remove us by showing fear of corona

On the occasion of the completion of six months of the movement, Tikait once again reiterated from the stage that the roti does not become the object of the vault, so the farmer has been on the streets for six months. We will not let hunger trade and this is also the reason for the agitation, but the farmers will continue to run the movement with peace and one day will force the government to bow down. Just farmers have to work with restraint. As long as you have to do it, you have to be ready for the movement. This movement also has to be watered like its crop, it will take time. Have to keep fighting without resorting to violence.

Rakesh Tikait called upon the farmers and said that if the people sitting in the villages do not come then how will the movement go. The movement will have to be guarded like a field, like a crop. Storms come and the tents of the agitators are uprooted. Apart from trolleys and bamboo, cots and other items are needed here. nothing to worry about. Everything will come from the village. If the movement is to run long, then keep the stuff. Both peace talks and movement will continue. Water, electricity will not be cut at the movement site. If the administration teases, then the farmers will get treatment in their area. On the occasion of Black Day, the farmers burnt the effigy of the Modi government at the border, however during this time the police tried to snatch the effigy and a farmer’s foot was also scorched.

VIDEO: Farmers across the country united through the movement, everyone’s issues are one and the same: Rakesh Tikait