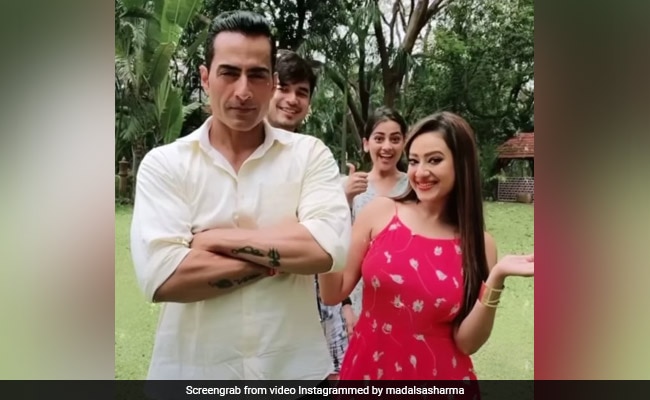 Mithun Chakraborty’s daughter-in-law Madalsa Sharma is dominated on social media due to her glamorous days. Madalsa has carved a special place in everyone’s hearts with Kavya’s character in the serial ‘Anupama’. Madalsa Sharma Dance Video has strong fan following on social media. His photos and videos are captured on the Internet as soon as he is shared. For the time being, Madalsa Sharma has shared a video on his official Instagram account which is very much liked by the fans.

It can be seen in the video that Madalsa Sharma is seen in a red color outfit. In this video with him, Vanraj i.e. Sudhanshu Pandey and Samar i.e. Paras and Nandani i.e. Angha Kishore Kumar are seen doing all the action on the popular songs. It is special that Madalasa’s husband Mimoh Chakraborty is also seen in this video. Fans are showering likes and comments on this video. Let us know that before this, photos in Kavya i.e. Madalsa saree were liked a lot. Let us know that after the divorce of Anupamaa and Vanraj in the serial these days, now Kavya plans to marry Vanraj soon. For which she provokes Vanraj against Anupama.

It is worth noting that Madalsa Sharma these days is seen in the number one show ‘Anupamaa’ on TV as ‘Kavya Jhaveri’. Madalsa started his career with the Telugu film ‘Fitting’ in the year 2009. Apart from this, she has also appeared in Kannada films. Madalsa was married to Mimoh Chakraborty, son of Mithun Chakraborty in the year 2018.