Jun 19, 2021
READ MORE  This cricketer heard the story of farmers, said, 'When a farmer loses courage', the Bollywood actor shared the video

73.05% of the people surveyed supported the government on agricultural reform and modernization

0 2
Share
New Delhi. Farmers have been continuously on the border of Delhi for the last three weeks in protest against the new farm laws of the central government. protest (Farmers Agitation). Till now no concrete result has been achieved between the government and the farmers. Farmers are accepting new Kannu against themselves. While the government says that the new law can bring a new revolution in the field of agriculture and farmers will get its benefit. The question arises, is the farmer really not happy with the new law? News18 Network did a survey last week regarding the new agricultural laws. Under this, an attempt was made to know the opinion of the people regarding the new law. According to the results of the survey, about 70 percent people are in support of the new agricultural law and they believe that this will benefit the farmers. While 54 percent of the people believe that the farmers’ movement is politically motivated.

In this service, we tried to know the opinion of people from almost every corner of the country, from Kashmir to Kanyakumari. Under this, questions were asked from people in 22 states and union territories of the country. Under this, an attempt was made to know the opinion of the people regarding the new law. 2412 people took part in it. Under this survey, a total of 12 questions were asked from the people regarding the agricultural law.

READ MORE  This cricketer heard the story of farmers, said, 'When a farmer loses courage', the Bollywood actor shared the video

What is people’s opinion?Most people say that this law is in favor of the country and the farmers and this will bring a big change in the lives of farmers in the coming days. At the same time, people also want that the farmers’ movement should end immediately.

Let us have a look in detail that the results of this survey: –
>> 56.59% People believe that this movement should be ended.
>> 53.6% People are in support of the new agricultural law. 30.6% people are not in support of this law. While 15.8% are not in a position to say anything about this.
>> 48.71% People believe that this movement of farmers against the new agricultural law is inspired by politics. 32.59 percent people say that this movement is not inspired by politics. While 18.70 people are not in a condition to say for sure whether it is politically motivated or not.
>> 52.69% People believe that the protesting farmers should not insist on repealing agrarian reform laws and compromise.
>> 60.90% Believes that farmers can get better prices under the new agrarian reform laws.
>> 73.05% Indians support reform and modernization in agriculture.
>> 69.65% People have welcomed the government’s decision that now farmers will have the option to sell their food grains outside the APMC mandi.
>> 53.94% People support the government’s offer of written assurance that the MSP will continue
>> 66.71% They do not agree that people should demand the withdrawal of the ordinance banning stubble burning of the central government.

READ MORE  From Kisan agitation to Corona case, read here 10 big news of the country and the world

These questions were asked

[q]1 Do you support reform and modernization in Indian agriculture?[/q] [ans]Yes, this is the need of the hour
No it’s not necessary[/ans] [q]2 Do you support the laws that the government says will modernize Indian agriculture and benefit the farmers?[/q] [ans]Yes of course
No
I’m not sure[/ans] [q]3. Do you know that under this law, farmers are allowed to sell their food grains outside the government-run APMC mandi?[/q] [ans]Yes i’m aware
No i wasn’t aware[/ans] [q]4 Do you support that farmers should have the option to sell their produce outside the mandis?[/q] [ans]Yes it’s their right
No, the current system is fine[/ans] [q] 5 Do you think that with the new laws, farmers will have the option to get a better price for their produce?[/q] [ans]Yes
No[/ans] 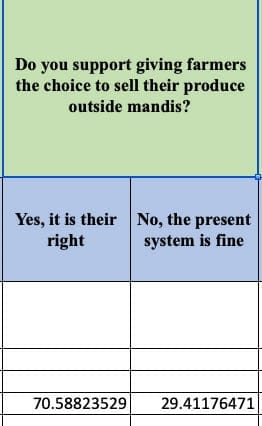 [q]6 Are you aware of the Prime Minister’s assurance that the current Minimum Support Price System (MSP) for rice, wheat and more than 20 grains will continue?[/q] [ans]Yes i know
No, that’s news to me[/ans] 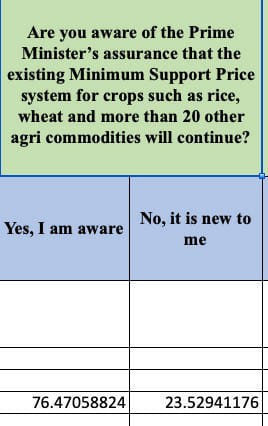 [q]7 Do you support the government’s offer of written assurance that the MSP system will continue?[/q] [ans]Yes i support it
No i don’t support
I’m not sure[/ans] 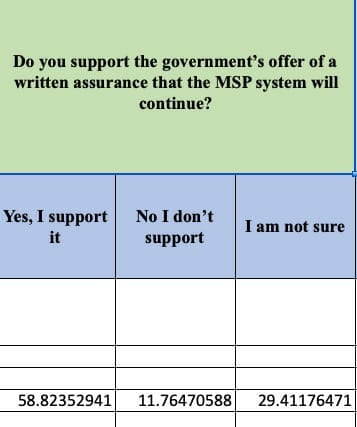 [q]8 Those who are demanding the withdrawal of three agrarian reform laws outside Delhi say that they will not compromise for anything. Do you support their stand?[/q] [ans]Yes i support it
No they should compromise[/ans] 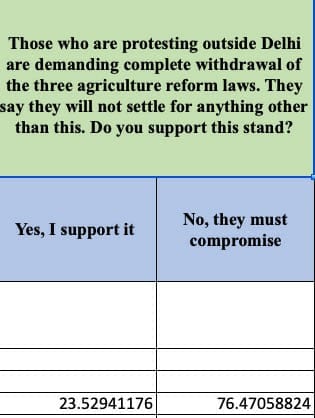 May 27, 2021
[q]9 One of the demands of the protesters is that the government should withdraw the ordinance banning burning of stubble, which causes pollution in Delhi and North India. Is this demand valid?[/q] [ans]Yes, pollution does not matter in Delhi
No, this demand is unreasonable[/ans] 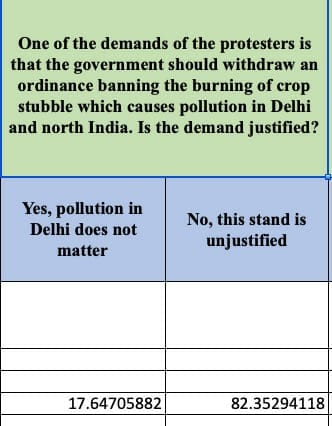 [q]10 Do you know that many opposition leaders, even when they were in power, supported similar laws?[/q] [ans]Yes
No[/ans]

[q]11 Do you think opposition to agricultural laws is politically motivated?[/q] [ans]Yes
No
Can not say[/ans] 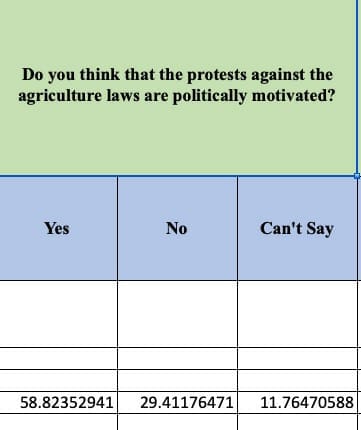 [q] 12 Is it time to stop this protest?[/q] [ans]Yes, protesters must compromise and go home
No, the protest should continue[/ans] Mithun Chakraborty fell on the set: Mithun’s health deteriorated during the shooting of ‘The Kashmir Files’, the makers had to stop shooting for the film