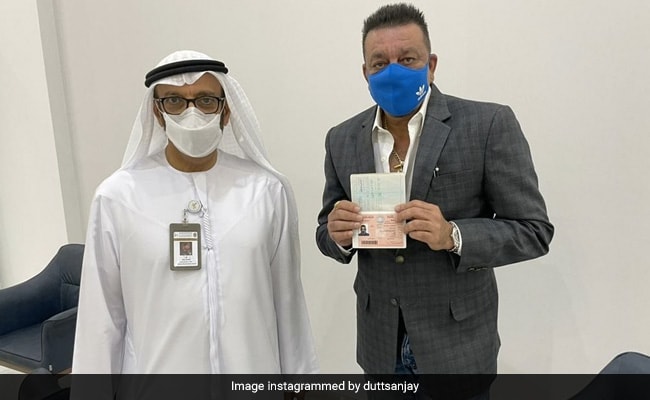 Bollywood veteran Sanjay Dutt has received a Golden Visa from the United Arab Emirates (UAE). The actor himself has given this information to the fans by posting pictures on his social media. Please tell that most of the time his family lives in Dubai. Although this visa was given to business men and investors, but now with the change in rules over time, it was also given to Golden Visa Professionals. Please tell that recently, Sanjay Dutt has returned after winning the battle with cancer.

Sanjay Dutt has shared 2 photos on his social media. In the first picture, he is showing the passport, while in the second picture he is seen standing with Major General Mohammed Al Mari. Sharing these pictures, the actor writes, ‘I feel honored to receive the UAE’s Golden Visa in the presence of Major General Mohammed Al Mari. I thank the UAE government for this honor. Let us know that along with the family, the fans are also congratulating the actor, Sanjay Dutt’s daughter Trishala Dutt has also expressed her happiness by commenting.

Sanjay Dutt Golden Visa is the first Indian actor to get a UAE Golden Visa. In 2019, the UAE government implemented a new system for long-term residence visas. This Golden Visa allows stay for 10 years. After the change in the rules, this visa was issued to special people including scientists and professionals. Talking about Sanjay Dutt’s workfront, he will now be seen in ‘KGF Chapter 2’. The film will be released on 16 July. Along with this, he will also be seen in films like ‘Prithviraj’ and ‘Shamsher’.