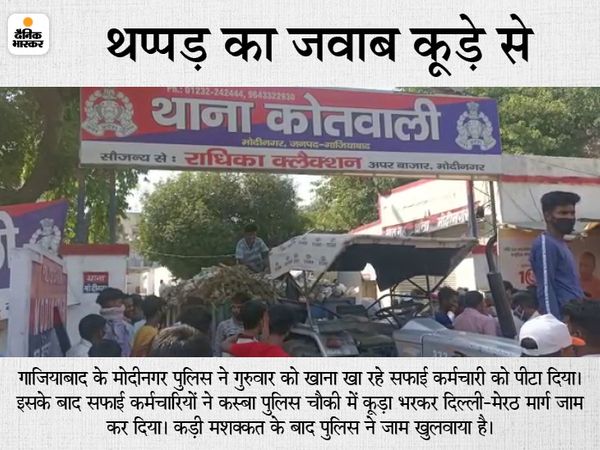 In Ghaziabad on Thursday, two police personnel met heavily with the scavengers. The soldiers slapped the sanitation worker of the municipality as an alcoholic. Angry sanitation workers dumped garbage in front of the town police post and blocked the Delhi-Meerut main road. The inspector, who reached the information, also got into trouble with the jurisdictional officer. This uproar, which lasted about three hours, has been repaired after the line was moved to both the soldiers.

Vijendra Kumar, a resident of Modinagar, is a sanitation worker in the Nagar Palika Parishad. After finishing his work on Thursday, Vijender was eating food at around 1.30 pm in the Gandhi Market premises. It is alleged that in the meantime two policemen came there and started assaulting the sanitation workers without saying anything. As soon as other cleaning staff came to know about this, they gathered and reached the town police checkpoint in front of the bus stand. Angry sanitation workers dumped garbage in front of the police checkpoint and shouted slogans against the police, blocking the Delhi-Meerut road.

On receiving the information of the incident, CO Sunil Kumar Singh and Inspector Munendra Singh also reached the force and tried to understand the cleaning workers who were committing uproar. The sweepers were filing a report against the accused police personnel seeking suspension. There was a fierce battle between the police and the sanitation workers. Angry sanitation workers put a pile of garbage outside the outpost and started pressurizing the police to get their point. Somehow the police kept explaining. MLA Dr. Manju Sivach, former MLA Pt Sudesh Sharma, Pt Ramasare Sharma and Palika President Ashok Maheshwari explained to the protesters.

The churning lasted till 5 pm, to be a three-day strike
The police officers tried to convince other colleagues who were leading the sweepers, but they were not ready to accept anything. The police also asked the two accused police personnel to spot the line and file a report but they were not ready to accept it. Due to which the officials kept churning till late in the evening, after the investigation of the whole case, the police have said that action should be taken against the culprits, the same cleaning workers have warned of a three-day strike across the city, angry with the matter.

Did not even listen to the MLA
MLA Dr. reached the information of the commotion Several councilors including Manju Sivach, former MLA Pt Sudesh Sharma, Pt Ramasare Sharma, Municipality President Ashok Maheshwari, the team of the Palika also reached the spot, but the cleaning staff did not listen to anyone. Both policemen were moved to the line. After this the scavengers removed the garbage. The police opened the traffic jam and restored the traffic.

Bribery Lekhpal of Etawah: The Lekhpal, who is getting more than 50 thousand salary, was caught taking a bribe of 2 thousand rupees, the Anti Corruption Team caught red handed

‘The New York Times’ report on deaths from Corona in India baseless: Government