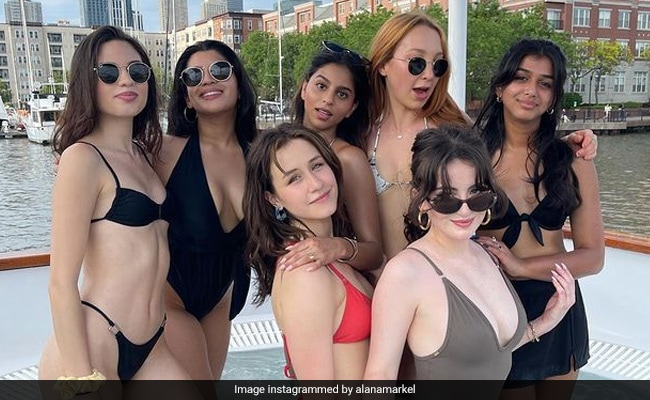 Shah Rukh Khan and Gauri Khan’s daughter Suhana Khan are one of the most talked about starkids in the film industry. Suhana Khan has recently celebrated her 21st birthday. Suhana Khan is often seen sharing her glamorous pictures on her social media account. In such a situation, some of his latest pictures have come out, which seems that Suhana Khan Birthday had a fierce party with friends on his birthday. These pictures of Suhana are very much liked by the fans.

In pictures, Suhana Khan Birthday Photos is appearing on a yacht. In these pictures, she is seen with her friends. Let me tell you, these pictures of Suhana have been shared by her friend Alana Merkel on her Instagram account, in which she is seen chilling in a party and Jacuzzi on a yacht with friends. Commenting on this post of his friend, Suhana has made a red heart.

Earlier too, a photo of Suhana Khan Birthday Party Photos was well liked on social media, in which she was posing in a black color dress with her friends. In this picture, everyone wore a black dress and during this time Suhana’s glamorous style was worth seeing.

At the same time, on her birthday, Suhana Khan also shared her photo in a very stunning and bold bodycon dress. In the picture, Suhana was seen on the terrace with open hair. Sharing her birthday look in Mint Green Dress, Suhana gave the caption – 21. Suhana’s look was also liked by her fans.