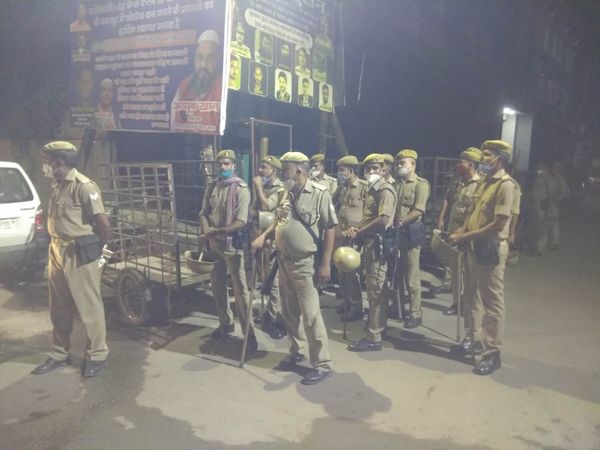 Police force deployed after the incident.

Two groups clashed over making a video of a young woman while learning scooty. The girl’s family picked up the accused youths and beaten them fiercely. Not only this, he also fired with a licensed revolver. After this, due to the matter between the two communities, a crowd of hundreds of people gathered on both sides and caused a ruckus. Police and PACs of several police stations including Fielkhana and Kotwali controlled the situation. Police force and PAC remained stationed in the area till late night. Made a video from mobile and then did a vulgar comment Here, the niece of a hotel owner was learning to drive Scooty on Telegraph Road, about a hundred meters away from her house on Thursday night. Two youths named Faiz and Mohsen stood near the Blue Dart building near Santoshi Mata temple. The woman alleges that when she was learning to drive Scooty, both the youth made a video of her from mobile and molested her while making obscene comments. The scared girl returned home and informed the crying family about the incident. The girl’s father, uncle and brother all rushed out of the house and caught the two accused. After this, dragging and beating brought him home and beaten both of them with kicking punches. Both the youths also beat up. During this time the hotel owner took out his license revolver and fired air. Hearing the sound of fire, there was a stir in the locality. Hundreds of people gathered from both sides and a ruckus erupted. On information, the police and the police station arrived. She also brought the woman’s family members, including the two accused, to the police station. The Lodhs deleted the video Inspector Feelkhana Satish Chandra Sahu said that at present no video of the girl has been found on the mobile phones of the accused. Footage of CC TV cameras installed in the area is also being viewed. Both sides have accused each other. After investigation, action will be taken by registering an FIR. PAC and police were forced to handle the mob, Police Commissioner Asim Arun said that there was a fight between the two communities over molestation. In view of the tension, the PAC has also been deployed along with the police. The case is being investigated. Strict action will be taken against whoever is found guilty.